Showing posts from April, 2009
Show all

By jollyrover - April 30, 2009
Q. From the novel Ulysses, "If you see Kay, Tell him he may. See you in tea, Tell him from me." A love song from Memphis Slim , If you see Kay Please tell her I say, "Hurry home." Lord I ain't had no lovin' Since my little Kay been gone. If you see Kay, Please bring her home to me. These are two instances of encoding. What is encoded?? Ans- if u see kay = 'f''u''c''k'... the word f*** , one of the first instances of the word coming up and somehow.... also the word 'cunt' = "see you in tea" This is actually an instance of If-You-See-Kay encoding. cracks- Dhananjay, Nakki
2 comments
Read more
By jollyrover - April 28, 2009
Q. Connect --> Titan , Safari, Saldanha, Masindra 7, Yenegoa Ocean, Stolt Strength, Longchamp, Victoria... Ans- Ships hijacked by Somali pirates Q. The shoot for the music video on January 26, 2000, caused the doors of the New York Stock Exchange to be closed. In fact the Stock Exchange locked its doors mid-day in response to fears of crowds gathering to watch the filming. This was not recorded as a closure as trading on the exchange floor continued uninterrupted. "We decided to shoot this video in the belly of the beast", said XXX , who was detained by police for an hour and threatened with arrest during the shooting of the video, despite the band having a federal permit to perform. The band was escorted from the site by security, after band members attempted to gain entry into the Exchange. Which video?? RATM- Sleep Now With the Fire. Q. Sitter - Gibbons was introduced by his then wife Dolores del Río to Mexican film director Emilio "El Indio" Fernández.
2 comments
Read more 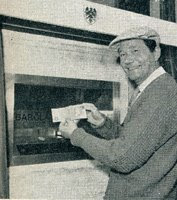 Q. Put fundae. Ans- 1st usage of ATM. Q. The use of the words "hell" or "damn" except when their use "shall be essential and required for portrayal, in proper historical context, of any scene or dialogue based upon historical fact or folklore … or a quotation from a literary work, provided that no such use shall be permitted which is intrinsically objectionable or offends good taste." With that amendment, the Production Code Administration had no further objection to Rhett's closing line. What?? Ans- The Gone with the wind dialogue "Frankly my dear, I dont give a damn" Q. A much older statistic shows the following. Put fundae. 1. Nil by Mouth 470 2. Casino 422 3. Another Day in Paradise 327 4. Summer of Sam 326 5. Twin Town 320 6. Sweet Sixteen 313 7. Narc 298 8. Born on the Fourth of July 289 9. Big Lebowski 281 10. Tigerland 276 11. Made 274 12. Fubar 274 13. Pulp Fiction 271 14. State Propert
4 comments
Read more

Q. The original idea for the band's name was "Civilian", but it was dropped when members found out that it was already taken.After the name was announced, it emerged that it was already being used by an unsigned band from Liverpool . The two bands worked out a settlement, involving $30,000 in a deal that allowed each band to use the name. To avoid confusion, the Liverpool band would rename themselves The Most Terrifying Thing. The name was mocked by critics due to its uninspired nature,, and was regarded as one of the worst in contemporary rock music, even of all time. Pitchfork Media called it the "most asinine bandname of the year", while Spin magazine chided it as "one of the dumbest band names in recent rock history". Which band?? Q. A poor, uneducated native of the Shafi ( Hadhramaut coast of south Yemen , XXX emigrated to Saudi Arabia before WW-1 , initially working as a porter in . In 1930, he started his own construction business and
2 comments
Read more
More posts